6 reasons the Fediverse is better than regular social media

Social media sucks. Platforms like Twitter, Facebook and Instagram are designed to turn your precious free time into money. What we see as a nice way to stay in touch with our friends, in reality are just many hits of dopamine stimulating precise spots in your brain, leading to you spending more time on the platform consuming ads.

But what if I told you that there is a huge ad-free social network out there, not governed by a central authority, full of great people and completely free to use? This place is called the Fediverse. Well, it’s not really a place, it’s many places.

See the 6 reasons and a good short overview of what the Fediverse is about at https://slashdev.space/posts/2021-01-18-reasons-the-fediverse-is-better 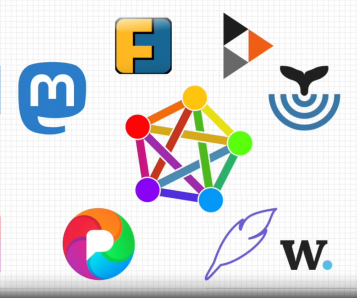 You probably heard that the Twitter-account of Donald Trump recently got compromised by the owners of the platform. I don’t want to engage in any political discussions, but the main flaw with this is the violation of freedom of speech.

There are issues with Twitter having so much power to silence people. For example, they also recently banned Sci-Hub. Similarly other GAFAMS have already hurt LGBT communities and other minorities with excessive bans. Federation does solve a lot of theses issues. Someone mostly disliked like trump, would be booted of most instances, while Sci-Hub, or LGBT communities, would be able to find many willing instances to host their content.

The idea that the Fediverse promotes the completely stupid “Free speech” view of the alt-right where anyone can say anything to anyone without any consequence is absolutely false. What the Fediverse enables is the possibility to have the rules of what is accepted be much more democratic.

Right, and we see that nazis have a much harder time on Fediverse than on Twitter precisely because policy is driven democratically instead of being decided by a corporation. I think the other big aspect is that Fediverse is operated largely nonprofit and people running instances are able to make morally sound decisions because of that. Twitter refuses to ban nazis because that would negatively affect their bottom line, and any moral considerations are secondary to that.

Yeah I found that strange too lol. The fediverse as a whole is much less tolerant of racism / fascism than the social media giants.

Excellent points, one of the numerous things the article is incorrect about.

I think the last point is particularly interesting. Centralized platforms end up creating more homogeneous communities because the same set of rules is applied globally by the company running the service. Meanwhile, federated services allow for a lot more diversity and naturally lead towards creation of smaller communities that have more meaningful interactions within them. Bigger isn’t always better.

One of the things that I’ve found odd in the Mastodon (especially) end of the fediverse are all these instances that are setup like the author describes - a microblogging instance for users who are into blue cheese, wear fedoras and never hold hands (or whatever supremely-specific thing they’ve gone for). I understand building communities around a thing, but it seems weird in social media as I feel that the notion of microblogging is more generalized than that, as the humans behind the accounts aren’t just one thing.

Should someone have 15 different Mastodon accounts that they need to bounce between? bob72@purple.shorts.net bob72@blue-cheese-rocks.com bob72@intel-only-screw-you-amd.co.pq ?

Maybe people don’t do that so much in reality… I just find the quite specific topic-based instances a little odd.

aka the filter bubble?

Not necessarily, as you can still federate with communities that have a different viewpoint. But there is certainly a risk of that with the Fediverse as well. However it is still better than having some AI automatically create a filter-bubble for you as is the case with Facebook, Twitter and Google.

Fediverse has a bonus in that you know you are in a bubble. Where social media giants make bubbles for you silently with their Ais.

And herein lies the problem with the mega sites - moderation. You just can’t staff for that many zillions of people without looking toward automation to protect the bottom line.

Historically, even larger communities - forums and such, would enlist mods who were actually members of those sub-forums/SIGs, to perform the less than enviable task to maintaining order in the community. Mostly from trolls and list bullies, because politicization has created a mostly newer dynamic in super large communities policed by the proprietors.

Problems such as these exist even here in the Fediverse, on instances like mastodon.social and many of the huge asian instances, although the latter are generally more focused, rather than generalized, and the members generally better behaved.

The beauty of this all in the Fediverse has been touched on several times even in this thread:

One can move instances, one can filter undesirable actors as well as instances, and instance admins can apply policy of what that particular instance will tolerate from other instances. Theoretically, if there are bad actors at one instance, the admin seeing this in the feeds on another can contact the admin of instance that is home to the bad actors - and this is indeed the recommended approach. Too many naive admins are quick to pull the trigger however, and end up disenfranchising themselves from instances that have many friends interacting with their own userbase. But it the remote admin doesn’t engage when requested, there is little choice and the instance can be blocked.

Heck, I didn’t even block Gab at first (I thought, it can’t be as bad as they are saying), when they initially came online, but then I started seeing swastika shit coming through the pipe and thought, "fuck that, my users don’t want to see that, and I didn’t want to deal with the (and I believe very few when compared to the huge userbase they have) plethora of bad actors spewing things just because it will incite anger from folks combing through the fedi streams. The whole decision took about a week and then I was like, “Oh no fuck that shit”.

There’s some pretty militant hate sites on the other side of the spectrum too, and after giving them opportunities for their admins to reign in their bad actors, what was needed was a “Complete defederation” with them too.

Basically, I’ve found that simply setting, “Media is forced NSFW” along with, “Posts are removed from the federated timeline” usually does the trick, and still permits local users to engage with people they wish to.

The way I’ve seen it for the past 30+ years is that, if I’m not getting complaints from my users or admins of other systems then I’m doing my job and it’s all good. And I still run an active FidoNET node (1:102/127) from decades ago when I first started offering dial-up Internet access (to the NSFnet) and nobody even knew what that was.

Everyone needs a place for them to go. And they should have it. Maybe not in my town square, but the Fediverse does indeed serve to accommodate all in a decentralized network that can look accordingly different from where you’re peering into it from, and that’s a good thing, because it breaks the freaking backs of the FacePlants and removedters and InstaSPAMs of this world, and returns us to a newer kind of network of true communities where people can interact locally as well as remotely with one another - without being nicely packaged for consumption by the privacy invading aggregators of destruction.

aka the innovation social network. Servers can try different things and find out what works

To be honest I’ve had to block over 80 profiles on MeWe for active trolling (a centralised platform) vs on Mastodon.social only three. I can mute, block or report a profile on Mastodon and Pixelfed, and on Mastodon even block a whole domain by the looks of it, if it is a trolling instance. My other big problem network with trolls was Google+ also a centralised network. So it’s probably true the bigger the network, the bigger the problem. As I’ve been involved more and more on P2P networks the experience has been even better as you only see / hear from whom you connect to.

What is great with a decentralised network is if you don’t agree with the policies of an instance you can move to another and your followers can still follow you. On FB, Twitter etc you are just out.

While I like the fediverse, I don’t buy most of these reasons.

What’s the feather-and-W logo on the lower right of the image?

That is Write.as / WriteFreely

The W is WriteFreely; The feather is Plume

This is the first I’m hearing of this, and it makes me want to switch to it from WordPress, lmao.

I have a friend and she has a WriteFreely instance where she publishes to her um, I’m not sure if it’s a Pleroma or Mastodon instance. But anyway, she’s also got a WordPress site that is federated.

Well WordPress comes with it’s own set of complications due to bloat and performance issues. GTMetrix has disenchanted many a would-be websmith who used some tool like Elementor to create a pretty site that just barely creaks along resulting in SERPs on page 7 of the search engines.

But in Wordpress’ defense, if you federate your site and publish, people can respond from Pleroma and Mastodon and it will show up in your comments. That’s not the case with write freely, although people can comment and those posts/toots/replies will show up on the respective Fediverse instance where the published article appeared under the account of.

There are a couple of ‘sort of’ kewl, but kludgey solutions for Jamstacks like Hugo and Jekyll that I’ve played with a bit, but this requires a couple of things. First, you need to have a Fediverse account on an instance to add a comment to the blog article, and second, it’s a little janky, since it’s not your instance that you’re commenting at so it’s a remote post requiring you to login and do a remote post. And it doesn’t return you automatically to the original blog site.

One person I know used their own account and fed comments from their blog site through that single role account - still not elegant.

but Things are deifinitely improving by leaps and bounds every single day. Hey, just look at Lemmy, for example :) This is really fricken’ kewl :)

And it feels almost just like Hacker News or Reddit too, so no learning curve for new initiates!

eat your own dogfood and delete your twitter: https://mobile.twitter.com/gadgeteerza

Yes I know, but it is really the only way I still reach ordinary folk to tell them about Fediverse and P2P networks. My Facebook, Instagram, Whatsapp, etc are all deleted. There is little point in only us talking to each other. A lot of what I do is promoting Fediverse and P2P to users who don’t know about them.

And I thank you for that, promotion of open-source alternatives and decentralized platforms is always good!

A community dedicated to fediverse news and discussion.